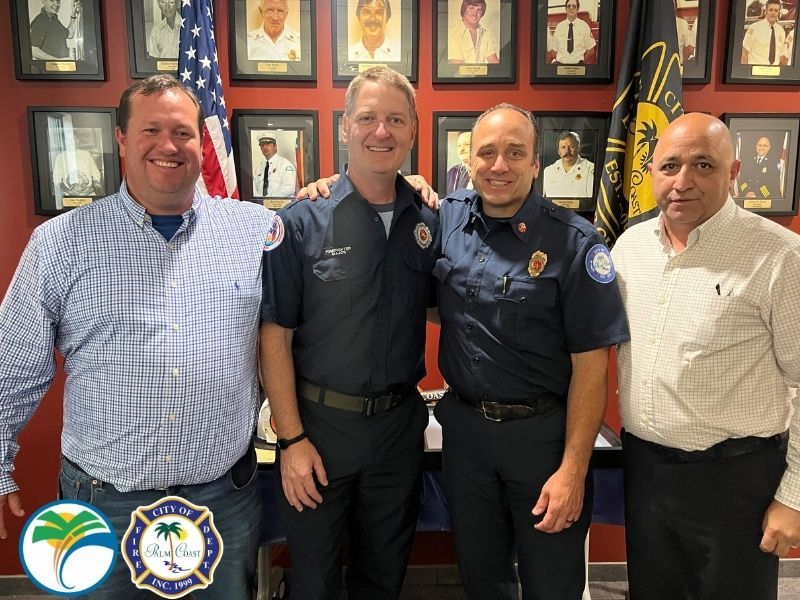 The Palm Coast Fire Department celebrates the retirement of Battalion Chief Sean Major after 31 years of service to the City of Palm Coast.

The Palm Coast Fire Department celebrates the retirement of Battalion Chief Sean Major after 31 years of service to the City of Palm Coast.

In 1991, Sean Major was working at a Lawn & Landscape with then-Lieutenant Mike Beadle. He was encouraged to check out the fire department as a volunteer. Lieutenant Beadle’s encouragement would lead to a 31 year career of service to the citizens of Palm Coast.

He began his first shift as a career firefighter on July 3, 1995. Three years later he would be among the first to respond to the 1998 Wildfires that devastated Palm Coast. When the fire department officially transferred under the control of the City of Palm Coast in January 2001, he was promoted to the rank of Lieutenant. Chief Major has always been known to have put his best foot forward and do his best for the department, he became among the agency's first paramedics when they established their Advanced Life Support program.

Sean was promoted to Captain in April 2009 to succeed recently promoted Deputy Chief Jerry Forte.  After his promotion he was tested yet again as the first on-scene incident commander for the FEC Train Derailment. He was promoted to Battalion Chief in January 2017. As Captain and Battalion Chief he has served as the Shift Commander for C-Shift where he was highly regarded and served as positive influence and mentor to many of the department’s members.

“I have had the distinct honor of knowing Chief Major his entire career watching him grow from a novice firefighter to what could be one of the best chief officers in the State” Fire Chief Jerry Forte said,” He has been a mentor, leader and trusted brother to all the firefighters. To me, he has been a reliable sounding board to keep me centered and most of all, a great friend. I will certainly miss him.

Chief Major completed his final shift on May 6, 2022; but he was able to give back one more time before his retirement. The Major name carries on in legacy as his son Tyler, a department intern will begin his first shift as a career firefighter.

Sean was a 1990 graduate of Flagler Palm Coast High School. He obtained his Firefighter from Flagler Adult Education, EMT Certifications from Daytona State College and his Paramedic Certification from Hart Start. He earned his Bachelor of Science in Public Administration from Flagler College.