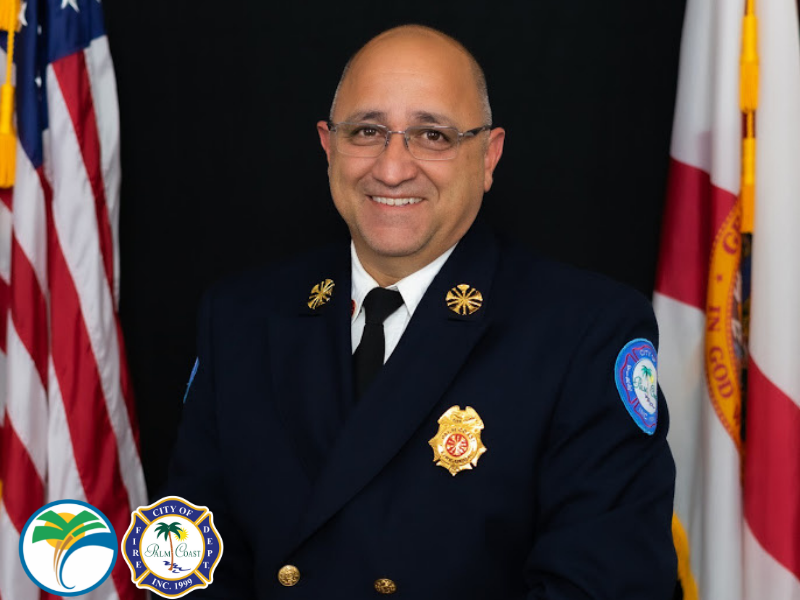 Palm Coast Fire Chief Gerard “Jerry” Forte formally announced his retirement at the March 15 Palm Coast City Council meeting. In a January 31, 2022 letter to Palm Coast City Manager Denise Bevan, Chief Forte shared his intentions to retire in mid-October after 32 years of service with the Palm Coast Fire Department after reflecting back on the defining moments of his career. In early March, Chief Forte shared his plans with his fire department personnel at the conclusion of a promotional pinning ceremony.

Forte joined Palm Coast Fire Department in 1990 as a volunteer firefighter at the encouragement of his brother Joe, then a Holly Hill firefighter. He became a full time firefighter under the mentorship of Chief Norman Lewis. Throughout his career in the fire service, Forte accomplished many personal and professional achievements. In 1996, he earned his Fire Instructor Certification, in which he trained and mentored firefighters throughout the region for many years.  He was promoted to Lieutenant in 1997, Captain in 2000, Deputy Fire Chief in 2009 and Fire Chief in 2018.

In 2019, he spent eight months as the Interim Director of Public Works to fill a leadership role until the position was filled by Matthew Mancill. Most recently, Palm Coast City Council selected Chief Forte to serve as the Interim Assistant City Manager in which he worked closely with City Manager Denise Bevan. “Among the many accomplishments celebrated as part of Forte’s legacy, the greatest may be the succession planning and mentoring program which has prepared the Palm Coast Fire Department for the next generation of officers to come and is a proven method to hire lifelong employees that place an emphasis on character first,” Bevan said. “We all wish Chief Forte the best in his retirement and thank him for his years of dedicated service.”

Forte earned the Chief Fire Officer designation from the Commission on Professional Credentialing in 2017. An honors graduate of Daytona State College’s Fire Science program, Forte also earned a Bachelor’s Degree in Public Administration and a Master’s Degree in Public Policy. He holds numerous state certifications and is a member of the Florida Fire Chiefs Association. He was the state’s 2002 Training Officer of the Year.

“For 32 years, the Palm Coast Fire Department has not only been a constant in my life but provided the stability to raise my children to see them live up to their potential. I could not be more proud of them as they now raise my grandchildren,” Chief Forte said. “This organization has also carried me during the most challenging times and raised me up to be a better person along the way. As a result, I have a loving wife, Lisa, and an expanded family that brings us happiness, joy and love.”

Jerry and his wife Lisa have four children between them and six young grandchildren. The Forte Family have deep roots within the fire service to include his brother Joe, a retired Holly Hill Fire Chief, daughter Jessica Matthews, a Daytona Beach Fire Department Battalion Chief, son Anthony, a Lieutenant with Flagler Beach Fire Department and nephew Jason, a Lieutenant with Flagler County Fire Rescue.

City Manager Bevan will appoint the next Fire Chief in the coming weeks. Chief Forte will be celebrated at a formal Transfer of Command Ceremony that is scheduled for the afternoon of Friday, October 14, 2022 at the Palm Coast Community Center.