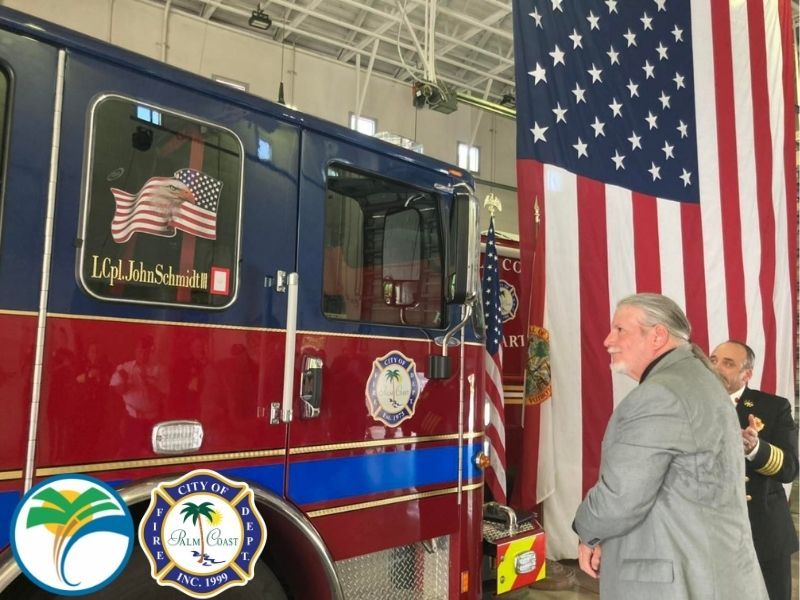 The Fire Department took delivery of a 2021- Pierce Enforcer Fire Engine earlier this year. The Fire Engine was placed into front line service at Fire Station 21, affectionately known as The Lion’s Den, located at 9 Corporate Drive.

Lance Corporal Schmidt was born in Carmel, New York and graduated from Oviedo High School in 2001; his family lived here in Palm Coast.  Schmidt joined the Marines at age 19 and was assigned to the 3rd Battalion, 8th Marine Regiment, 2nd Marine Division, II Marine Expeditionary Force at Camp Lejeune, N.C. He left for his first tour on January 2005 to Al Anbar Province, Iraq with his 3/8 buddies.  On the first day of elections, just two weeks after his arrival to Iraq, he was critically injured in a blast.

He was brought back to the states and taken to Brooke Army Medical Center in San Antonino, Texas.  He sustained a chemical injury to both lungs; he later died from those injuries on May 11. Lance Corporal Schmidt was laid to rest with full military honors at Arlington National Cemetery. He was awarded the Purple Heart. John was known for his love of the Marine Corps; his family shared a story that while in intensive care he was visited by the Commandant of the Marine Corps while under sedation. When coming to and being shown the Commandants Challenge Coin, John immediately wanted to know if his hair was “high and tight.”

The idea for dedicating a fire truck to the memory of a Fallen Solider was proposed by Firefighter-Paramedic Christopher Strozier, who is a Navy Veteran. Firefighter Strozier stated, “We often forget why we have the rights and freedoms we do. Dedicating the fire engine to the memory of a Gold Star Families is a small way to show our appreciation for what they have sacrificed.”

The Fire Department plans each Memorial Day to dedicate a Fire Engine to a Gold Star Recipient whose name is inscribed in the Veterans Memorial at Heroes Memorial Park. In 2021, Ladder 25 was dedicated to the memory of Marine Sergeant Zachary J Walters; which weeks after the dedication, Ladder 25 was involved in a high profile rescue of a juvenile threating to jump off an overpass.

“John’s Engine will be first in and last out to all the calls for one of our busiest zones and second due to everywhere in the city,” stated Fire Chief Jerry Forte. Chief Forte added, “we will send Johns truck to ease the pain, suffering and anxiety of those in distress or perhaps just make their day better; just as he set out to leave this world a better place, by his willingness to defend this great nation. We’re forever grateful for his supreme sacrifice.”

The event was live-streamed on the Palm Coast Fire Department’s Facebook page. Additional photos are also available there.