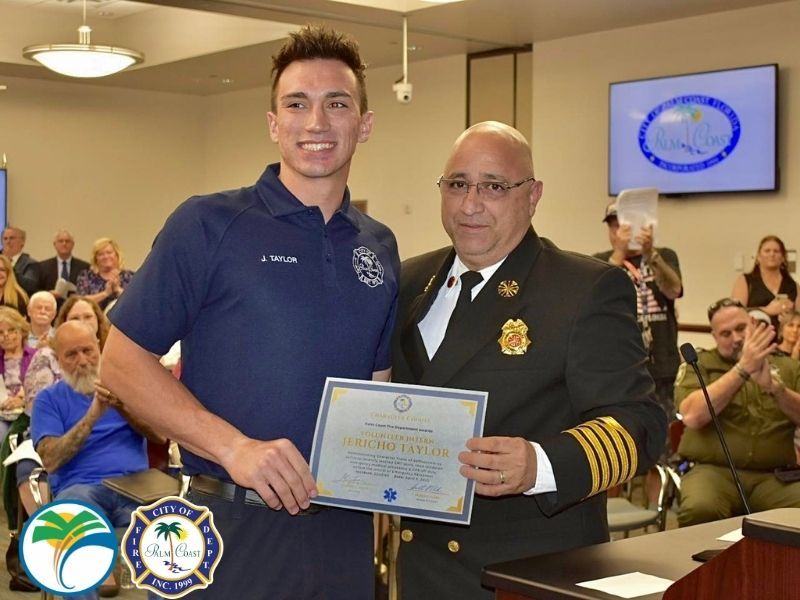 Palm Coast Volunteer Firefighter Jericho Taylor character was recognized by the City Council for his interventions at a recent fatal motor vehicle crash.

On Wednesday, March 2, 2022, Taylor was on his way home when he came upon a severe motor vehicle crash on Belle Terre Parkway and Pine Grove Drive. When he arrived on the scene, he recognized that the driver of the vehicle had been possibly ejected and was pulseless. He immediately began to initiate Cardiopulmonary Resuscitation (CPR).  Engine 25 and Ladder 25 arrived on the scene to find Taylor, a recent addition to the fire department, performing chest compressions.  The crew credited Taylor’s interventions with the immediate return of spontaneous circulation of the patient.

Jericho Taylor is a lifelong resident of Flagler County. A 2019 graduate of Matanzas’s High School, he is currently completing the Emergency Medical Technician (EMT) program at Flagler Technical College and is scheduled to begin the Firefighter Minimum Standards program this May at Daytona State College.

Taylor has been a part-time employee of the City of Palm Coast since 2019. He currently works as a lifeguard at the Palm Coast Aquatics Center for the Parks and Recreation Department. He joined the Palm Coast Fire Department as a volunteer intern in September 2021. Earlier the day of the crash, Taylor was informed that he would be sponsored by the fire department for his firefighter certifications.

“When we look for future firefighters, we are employing them based on character first, “Fire Chief Forte said, “Jericho was under no legal obligation to stop, but he did so because he felt it was the right thing to do. We celebrate his selflessness and dependability”.

Palm Coast Mayor David Alfin added, “We’re so blessed to have selfless public service professionals and trainees who don’t think twice about stopping to help anyone and everyone in need. Thank you to Volunteer Firefighter Jericho Taylor for this heroic act and for your commitment to the residents and visitors of Palm Coast.”